Cal Poly first began participating in the famous Tournament of Roses Parade in 1949, when the Pomona and San Luis Obispo campuses combined their resources and learn-by-doing philosophy to produce their first student-built float. With only $258 to spend that first year, Cal Poly students crafted an entry featuring an oversized rocking horse to illustrate the parade’s “Childhood Memories” theme. On that New Year’s Day in Pasadena celebrated more than half a century ago, the tradition of an annual Cal Poly entry in the renowned Rose Parade was born.

Today Cal Poly holds the longevity record for collegiate entries, and places sixth in the list of continuing contributors overall. The Cal Poly entry is still produced as a joint effort between the two universities, using flowers grown on both campuses. Cal Poly has also introduced innovations for the benefit of the parade, such as computer-controlled animation, use of hydraulic systems for movement, front wheel drive, and propane for cleaner emissions. Producing the float is a year-round effort on the part of three groups. The Rose Float Committee consists of 10 to 15 members on each campus who plan and construct the float. A new committee begins in their work each February, with Saturday meetings at the lab for the rest of the year. The Rose Float Club supports the committee’s efforts by raising funds, providing lunches in the lab, and helping during “deco week” with shaping, floral preparation, and other decoration tasks in the final weeks prior to the Tournament of Roses parade. The Rose Float Alumni meet three to four times a year to help during major campus events such as Homecoming and Poly Royal and during deco week. Many of the graduating students who participate in the Rose Parade become float operators for other cities and corporations involved in the parade.

In 1998, Cal Poly’s Rose Float effort was transformed from a club into an Associated Students, Inc. program, receiving funds from both ASI and the University to produce the annual Cal Poly float that draws 200,000 spectators and an international audience of 500 million television viewers.

Click on a thumbnail below to see more images. 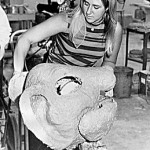