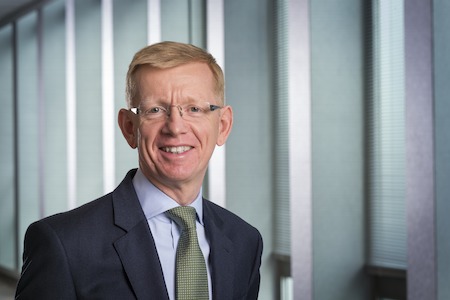 Keith Webster’s Library of the Future

— 2 Comments ↓
Back to News and Stories

Kennedy Library hosted library visionary Keith Webster for an exciting talk on the evolving nature of libraries and insights on emerging trends in the library world that can redefine the academic experience of students.

Webster’s public talk was part of a one-day colloquium on polytechnic libraries, hosted by Kennedy Library and the Kennedy Library Advisory Board (LAB). Below are some of the key takeaways from his keynote presentation, “Building the Library of the Future”

Understanding how we got here

Before we can visualize the modern library, we have to look back at how libraries have evolved over time, according to Webster. “Why are we being bypassed if we are?” Webster asks.

Libraries are without a doubt rapidly changing environments. 25 years ago, libraries used to be collection-centric facilities. “As technology came on board in the early 90s we became much more client focused,” Webster said. By the early 2000s we saw the impact of technology on teaching and learning. “We saw a rise in the demand for facilities to support projects and group work,” Webster explained. About a decade later, “we started to recognize that the library was a node in the learning process.” Consequently, libraries have become maker-spaces and put more emphasis on collaborative opportunities.

The demand for digital delivery is on the rise according to Webster. “On-demand, shared resources are changing the dynamic of what a library collection can be in the 21st century.” As a result, Webster believes open access resources will be game-changers becauses libraries need to become more open enterprises. “Open access is shaping the policy agenda,” Webster said.

As it often times has, technology has also played a prominent role in shaping the modern library. “Students are more technology rich than ever before.” Webster believes technology at libraries will become increasingly mobile and will continue to reduce costs of production and distribution at libraries.

Despite these trends, Webster believes that every library is unique. “There is no secret formula, every institution has its own needs, priorities, and communities,” he said. However, there is one commonality between all university libraries: “The future of the university is intricately intertwined with the future of the library,” according to Webster.

Listen to the podcast recording of his talk “Building the Library of the Future” at Kennedy Library:

Keith Webster is Dean of Libraries and Director of Emerging and Integrative Media Initiatives at Carnegie Mellon University. For more on the ways he’s shaping academic library innovation visit his blog: Library of the Future.

2 comments on “Keith Webster’s Library of the Future”