When Poly Was Royal: Queens on Campus

— 2 Comments ↓
Back to News and Stories

This post is written by Soquel Filice (HIST ’15), a Student Assistant in Special Collections and Archives. Soquel curated When Poly Was Royal, an exhibit on the history of Open House at Cal Poly. In the process, she was inspired to write this post on a long-standing Poly Royal tradition. Learn more about Poly Royal history. Want to know more about the history of women at Cal Poly? Read Soquel’s posts for Women’s History Month. 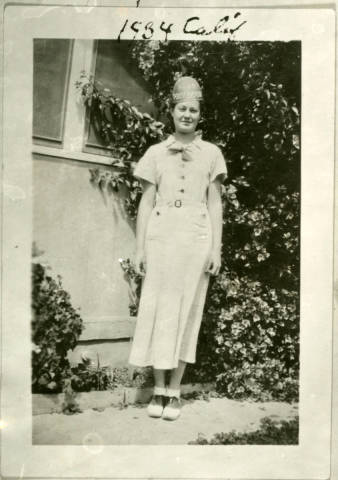 Jane Horton Bailey was named the first “Miss Poly Royal” in 1934. Although we don’t have much information about Miss Bailey’s role as “Miss Poly Royal,” the role of her succeeding queens included publicizing Poly Royal throughout the state, and the coronation ball on Saturday night of Poly Royal weekend when a new queen was crowned each year. As the event grew bigger, queens continued to “reign” over the event and were a part of several publicity stunts (1). In 1952, Poly Royal Queen Geraldine Cox “reigned over” the Poly Royal festivities. Out of all of the Poly Royal Queens, we have the most photographs of her that document what she participated in.

The Poly Royal committee photographed her posing in classrooms, holding farm animals, and being near the men of Cal Poly who were ostensibly teaching her about the “Learn by Doing” philosophy. In several of these photographs she is seen as almost a trophy-like figure or a prop that can be placed anywhere, but is not part of the action. In the photograph below, she looks out of place and in need of help to fix a mechanical engine.  This stereotype of women can be seen in photographs of the queen and her court, especially in this 1952 picture of the Poly Royal court “sitting pretty” atop of a plane in the Aeronautical Engineering department. For many Poly Royal queens, their job was to highlight Cal Poly’s “Learn by Doing” accomplishments, but not to actively participate. 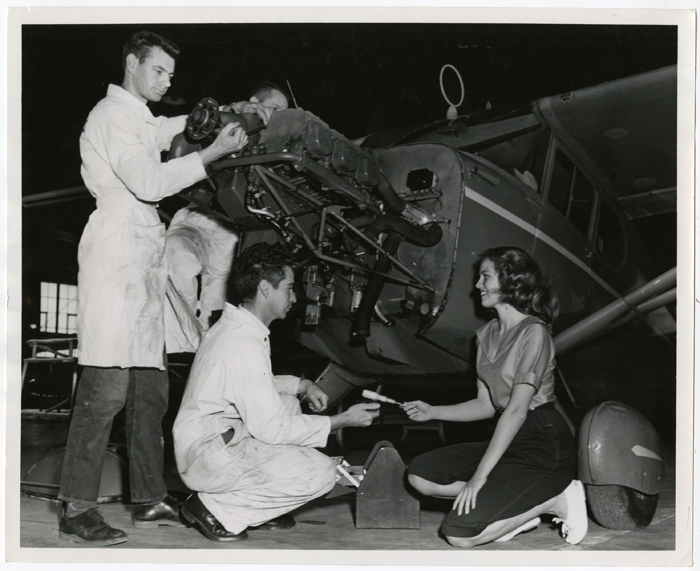 The Poly Royal Queen and her Court sitting on a plane at the Cal Poly Airstrip, 1956 (University Archives, California Polytechnic State University, ua-pho_00001991).

In 1957, when women were welcomed back as students on campus, Val DeGeus became Cal Poly’s first queen selected from the student body. As the population of women grew on campus, the duties of the Poly Royal Queen changed. According to Queen Contest history, “The Poly Royal Queen serves as a spokesperson or representative for Cal Poly. As Poly Royal Queen, the woman selected will travel throughout the state representing Cal Poly and promoting Poly Royal” (2).

One of the most famous instances of a Poly Royal Queen acting as a state representative for Poly Royal was in 1967. During the 35th annual Poly Royal, Queen Tee Carter traveled up to the state Capitol Building to meet with Governor Ronald Reagan. This year also marked one of the biggest publicity stunts Poly Royal ever accomplished. Not only did Tee Carter meet with the Governor, but in honor of the Pony Express, they sent off two horseback riders to carry a letter from Reagan in Sacramento all the way to San Luis Obispo. On their route, they passed out brochures and stopped in several towns in order to spread the word about Cal Poly’s annual event. With the help of Poly Royal Queens and a great publicity team, Poly Royal grew into a tradition that would never be forgotten. 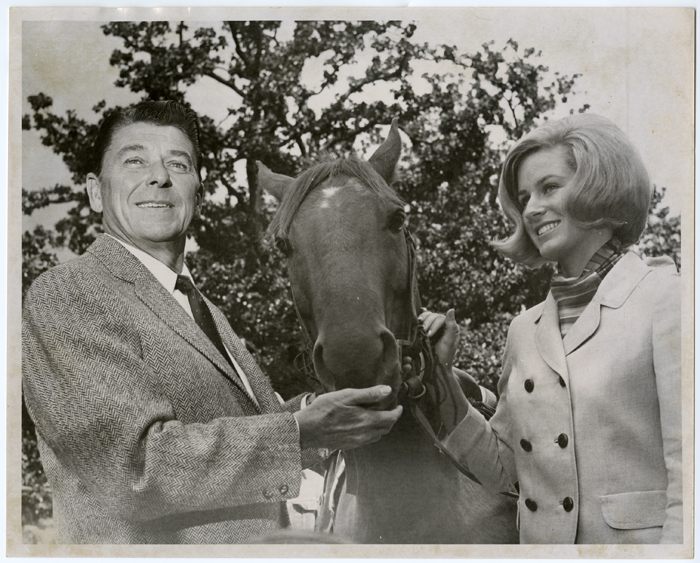 The End of an Era

By the 1980s, Poly Royal Queens were given much more agency, and women at Cal Poly started to break typical gender roles on campus. In 1982, women at Cal Poly began majoring in horticulture, computer science, aeronautical engineering, and architecture, all male-dominated departments (3). Angela Darnell broke a color barrier in 1985 when she became the first African-American Poly Royal Queen (4). In 1988, the Poly Royal executive planning team decided to replace the Poly Royal Queen with six representatives to publicize and promote the annual event, allowing both men and women to participate in this time-honored tradition. After Poly Royal ended in 1990, Open House continued to use student representatives to plan the event.

To learn more about Poly Royal history and see some interesting historical artifacts, come check out the exhibit When Poly Was Royal: From Farmer’s Picnic to Open House in Special Collections and Archives, Room 409 of Robert E. Kennedy Library. See more digitized Poly Royal items at our online collections!

2 comments on “When Poly Was Royal: Queens on Campus”