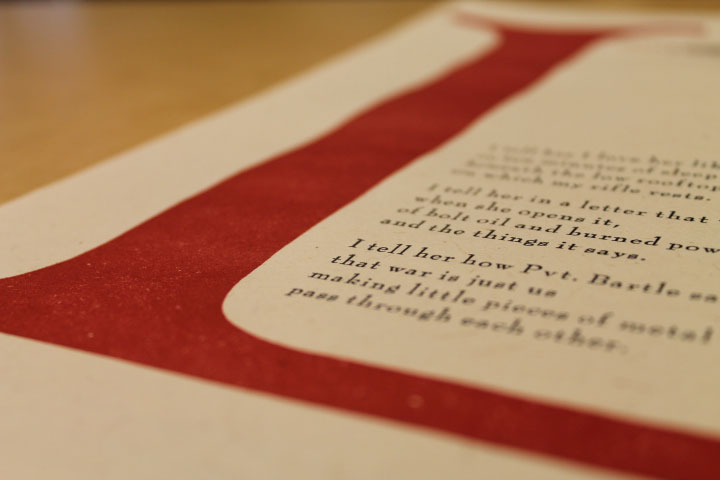 Written by Karen Lauritsen on February 9, 2015

Broadside: Letter Composed During a Lull in the Fighting by Kevin Powers

Cuesta College’s 2015 Book of the Year is The Yellow Birds by Kevin Powers. In partnership with the San Luis Obispo County Library and San Luis Obispo Reads Program, the author will visit for a conversation and book signing on Thursday, March 26, 5-7pm.

Turns out that Special Collections and Archives has a beautiful broadside* of a poem by Kevin Powers called Letter Composed During a Lull in the Fighting.

The broadside pictured above featuring Powers’ poem is by Carolee Campbell, owner of Ninja Press.

Since 2000 Ninja Press has been creating broadsides and chapbooks especially for the benefactors and patrons of The Sun Valley Writers’ Conference held in Sun Valley, Idaho in August of each year. An excerpt from a text is selected from the works of a chosen presenter for that particular year and is rendered into this limited edition. — Ninja Press

Kevin Powers was invited to the conference in 2012, when The Yellow Birds was a finalist for the National Book Award in fiction. However, the conference had to be cancelled due to a wildfire, which is why there is no signature on the broadside, Campbell explains in a letter. She also explains how she was inspired by photographs of Tal Afar and the American troops there: everything was the same color, the color she chose for the paper, a handmade flax by Cave Paper.

See it in Special Collections and Archives on the 4th floor.

Tickets to Cuesta College’s 2015 Book of the Year are free for students and veterans; all others $5.

* A broadside is “a large sheet of paper printed on one side only. Historically, broadsides were posters, announcing events or proclamations, or simply advertisements. Today, broadside printing is done by many smaller printers and publishers as a fine art variant, with poems often being available as broadsides, intended to be framed and hung on the wall.” — Wikipedia