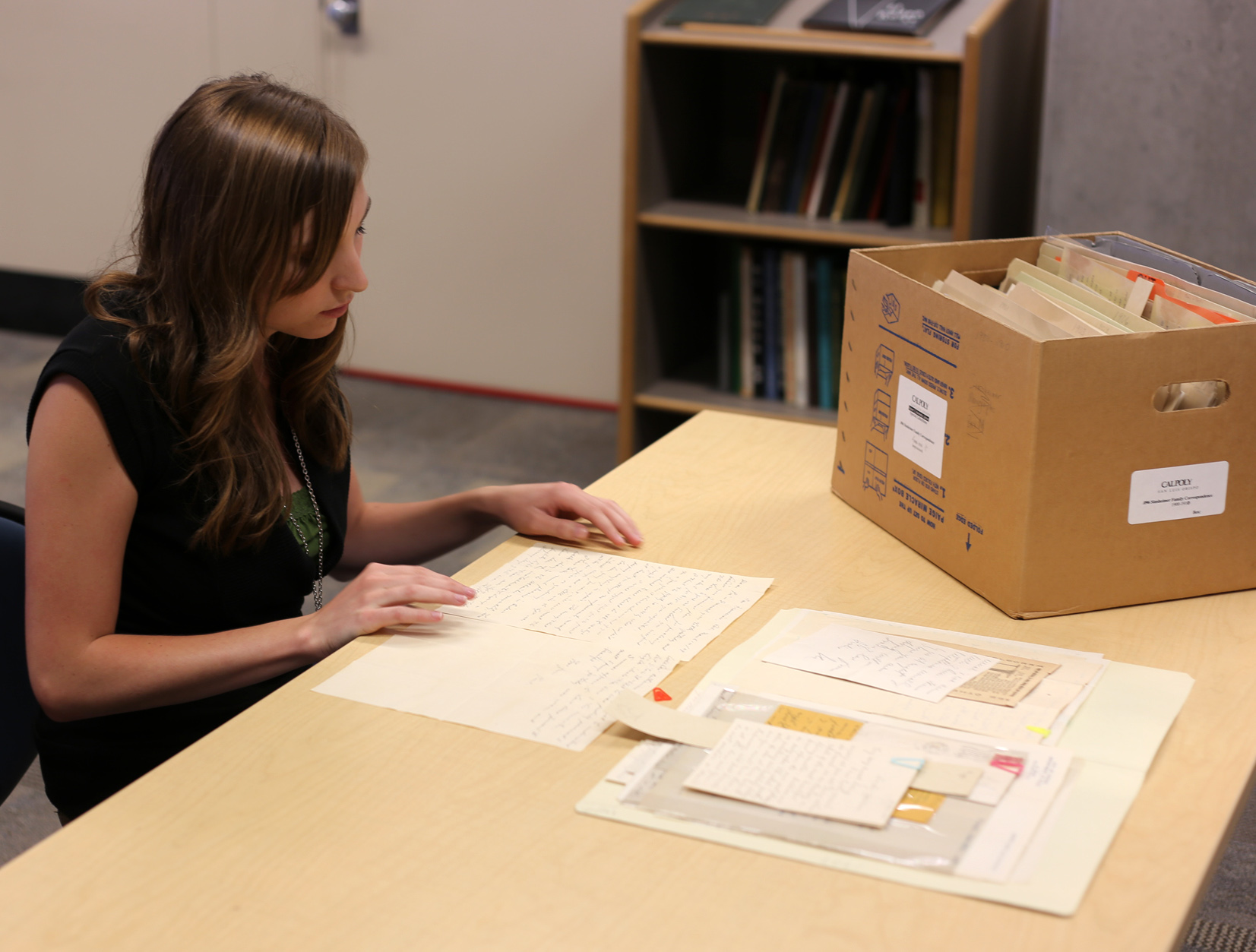 Wendy Myren is a history graduate student (Spring ‘15) completing an internship in Special Collections and Archives. She is working on a project to organize the correspondence of the Sinsheimer family of San Luis Obispo. This is the fourth in a series of blog posts in which she shares some of her experiences in the internship and some of the stories she uncovers.

Historians become giddy when they find an archive that relates to their research topics or personal interests. Going through the Sinsheimer correspondence peaked my interest, but I never thought that I would find a direct connection to the U.S. White House, in a 12-page record of a meeting between Paul Sinheimer and Theodore Roosevelt in 1916. Who knew that this San Luis Obispo native would one day hold audience with a former president?

Who is Paul Sinsheimer, anyways?
Paul was the seventh child of Aron and Nettie Sinsheimer, born in 1879. After earning a law degree from UC Berkeley, Paul worked as a journalist in San Francisco until 1912. From 1912 to 1917, Paul worked for the California Railroad Commission as a financial analyst. After the end of World War I he served the federal government in Washington D.C. as a bond expert.

Paul is an extremely interesting character to read about. Fortunately, he wrote letters frequently, which allowed me to follow his day-to-day life. Unfortunately, he was a very sloppy writer! It’s a frustrating task trying to decipher his script, but it always pays off in the end. However, we’re lucky that he typed the transcript of his meeting with Roosevelt—he alluded in his cover page that the typed document would be important in the future. He states:

I have now put it in typewriter form and am sending you a copy for merely family use for filing away for possible future reference and interest. Of course it should be kept strictly a family matter, as there is much in it of a confidential nature.

The Document
The California Railroad Commission, which Paul represented when he met with Roosevelt, regulated railroad corporations. Paul appealed to Roosevelt to support him in placing regulating power in the Interstate Commerce Commission. Paul believed in “supervision instead of prosecution; and in regulation instead of dissolution.” As Paul records, Roosevelt’s response was enthusiastic:

Here [Roosevelt] bounced on to the table and leaned across toward me emphasizing his words by pounding his right fist into his left palm. “Now, if we could only get our commissioners to understand that. That is the idea; to have regulation instead of dissolution. These things would develop our industries. That is what we want.”

Paul and Roosevelt also discussed how “absurd” President Wilson’s policies toward railroad corporations sounded (Later, Aron wrote in a letter that Roosevelt sent a letter to Paul stating that he took Paul’s advice… but I haven’t recovered Roosevelt’s letter yet).

World War I
Roosevelt and President Wilson did not agree on the politics of World War I. In fact, these men had completely opposite views on how to handle the situation. As Roosevelt told Paul Sinsheimer, mobility of the army was the most important factor in naval warfare. Paul chillingly forewarned: “Rightly or wrongly, we on the Pacific Coast believe that Japan looks with covetous eyes on America.” World War I marked the beginning of Japanese-American antagonism that came to a head in 1941, and Paul would live to see it.

Roosevelt refers to Paul Sinsheimer as his “friend,” but Aron and Nettie Sinsheimer performed some of the humanitarian acts that Roosevelt fought against in regards to one World War I policy–Roosevelt strongly believed in committing oneself completely to the United States, and denounced the German-Americans who supported Germany and not American neutrality. In their letters, Aron and Nettie Sinsheimer mention sending provisions for German civilians and soldiers in Europe, which showed their strong sense of kinship to their homeland. Louis Sinsheimer helped raise money for those suffering in Germany. I wonder if Roosevelt knew this fact about Paul’s family, and if it would have changed his opinion and hospitality toward him.

My next blog post will be the last from my internship in Special Collections and Archives!