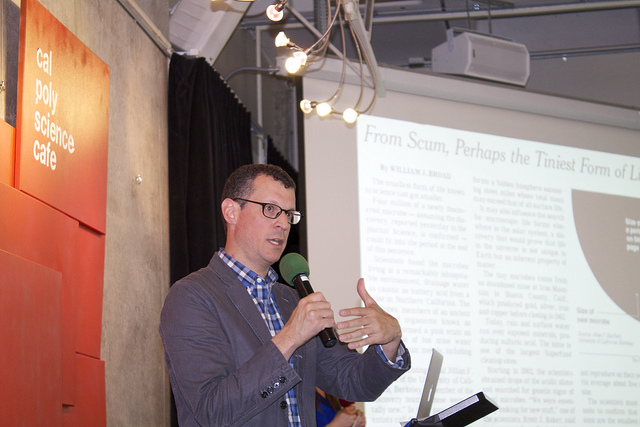 Open Science Cafe: “How to use data and design to tell stories” with Steve Duenes, graphics director at The New York Times

“When something is new to us, we treat it as an experience. We feel that our senses are awake and clear. We are alive.” —Jasper Johns

This quote reflects the once-in-a-lifetime opportunity I had leading Open Science Café on Friday, May 9th 2014: “How to use data and design to tell stories” with Steve Duenes, graphics director at The New York Times.

This was largest and most rewarding event I have ever planned. There were 150 people in attendance during the lecture and 120 people partaking in the interactive workshop after Steve’s talk. Here’s a timeline of how the day unfolded.

Before the event began (and after only 5 minutes of meeting him in-person), Rachel Scott, communications and public programs student assistant, and I led a video interview with Steve Duenes in Kennedy Library’s atrium. The video will be released later this June. In our interview you will hear Steve’s thoughts on how he became interested in data visualization, what his team’s creative process entails, and much more. You’ll find the video on Vimeo.

Following our conversation with Steve, the Open Science Café team and I began to set-up the second floor café area. We conducted sound checks, adjusted lighting, and set up seating arrangements and supplies.

Steve’s presentation was set and the show was ready to begin! Karen Lauritsen, my Open Science Cafe mentor, began by introducing me as this year’s student grant winner. Following her, I had the honor to introduce Steve.

Steve discussed visual storytelling and showed examples of what to avoid when designing infographics — overwhelming text, graphics, and not enough quantitative data.

Steve then introduced The New York Times piece How Mariano Rivera Dominates Hitters and went on to teach us key principles and guidelines for data visualization.

With these ideas in mind, Steve had us work with two sets of data. The first set featured the population and tax rates in Spain, UK, France, and Germany. The second set listed the hypothetical market share of Apple, Lenovo, Samsung and Nokia.

Sketches made during Open Science Cafe

Rachel and I opened the floor for questions.

We wrapped up! Thank you to all who attended. Thank you especially to Kennedy Library and to all of our partners! Department of Art+Design, Journalism Department, and AIGA Santa Barbara.

That was the end of the official program for Open Science Cafe, but it wasn’t the end of my day with Steve!

My graphic design professor Charmaine Martinez (who went to college with Steve) and I went to lunch with Steve. We showed him around downtown SLO and enjoyed a coffee before he gave a second lecture at 4pm.

With lasting energy and excitement, Steve held a lecture about the graphics department at The New York Times in the Baker Science Building.

In this talk, Steve introduced the graphics team and their goal: making graphics less abstract and more reliable. Steve led us through the team’s design process on some projects, such as the The World Trade Center As It Was, Nadal’s Knee, and The Jockey.

Visualization is mean to clarify the subject of our storytelling to users. – Steve Duenes

Copy and imagery should be a cohesive experience. For those interested in interactive design, Steve suggests learning user interface design. It is important to build up one’s tech skills as a designer.

Celebratory dinner with Steve as a thank you for an inspiring and successful event!

Thank you to Karen, Charmaine, Rachel and to ALL for your support and Open Science Cafe for this experience. It has been an incredible journey!