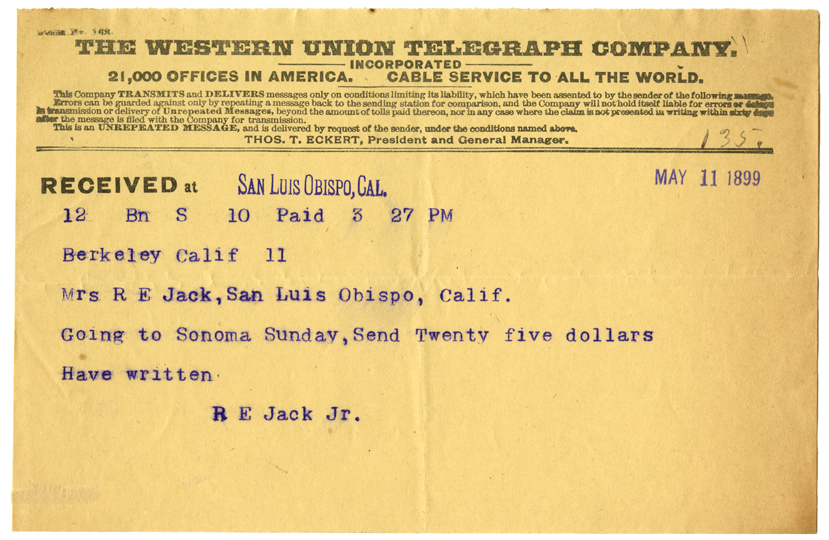 Discoveries in the Jack Family Papers: Some things change and some things don’t

— 4 Comments ↓
Back to News and Stories

Derrick Usher is a communication studies major (Fall ’14) completing an internship in Special Collections and Archives. He is working on a project to organize the papers of the Jack Family of San Luis Obispo.

This is the third in a series of blog posts in which he shares his experiences processing the Jack Family Papers and some of the stories that he uncovers (read the first two blog posts here and here).

The last six years of the 19th Century

While I’m sure there are a multitude of factors that contributed to R.E. Jack’s success, my work on the Jack Family Papers has led me to believe a major factor was Jack’s affiliation with the West Coast Land Company. This company, in which R.E. Jack held the positions of Treasurer and Vice President, developed the bulk of S.L.O. County. The magnificent amount of property Jack held, along with his vested interests in the Southern Pacific Rail Road Company likely did not hinder his plans of development.

Over the past few weeks I have inventoried the portion of the Jack Family Papers which span 1894-1899. Over this period of time R.E. Jack and his business associates began developing Oceano and Morro Bay, while still continuing the development of Lompoc. Jack also began to capitalize on his Cholame Ranch. He continued to run livestock, sold some of the ranch land, and explored the potential for oil reserves on the ranch. The oil exploration paid off. In 1899 Jack leased some of his Santa Barbara County land with oil rights to a couple from Mexico in exchange for the couple’s land with mining rights in Mexico. Shortly after this exchange Jack assisted in the creation of the San Luis Oil Development Company.

Mexico wasn’t Jack’s only investment outside the U.S.  In 1898 he purchased  land in Alaska (which didn’t become a U.S. state until 1959). This purchase consisted of 3,400 acres and included the water rights. Shortly after Jack’s purchase the Alaska Hydraulic Syndicate Company was created. Jack promptly purchased 10,000 shares of this company’s stock. R.E. Jack’s interest in water was not surprising, considering the role he played in investigating the potential water sources needed to service San Luis Obispo.

R.E. Jack’s interest in banking remained strong during this time as well. In 1899 the Bank of Paso Robles was incorporated with the assistance of Jack, and he served as the bank’s President. In the same year, however, Jack briefly closed the County Bank of S.L.O. Due to drought, many of the local farmers lacked the ability to make their land mortgage payments.

It doesn’t take much historical knowledge to understand that there are significant differences between the ways we live today and the  late 19th and early 20th centuries. One such difference would be safe and equitable working conditions. An 1875 receipt from the Chinese Labor Exchange in the Jack Family Papers illustrates the stark contrast—receipts show that R..E. Jack paid an initial $2 to hire a Chinese laborer named Wy Lee to work on J.H. Hollister’s Chorro Ranch. Wy Lee earned $20 a month, but he paid $20 from his earnings to the Chinese Labor Exchange in San Francisco.

One similarity that I’ve noticed between then and now is that the rich and powerful remain rich and powerful, and the methods used to maintain such status can be clandestine in nature. The information I’ve processed reinforces the adage: “it’s not what you know, it’s who you know.” R.E. Jack was an intelligent individual who married into a prominent family and participated in fraternal organizations, including the Freemasons and the Knights of Pythias. The Knights of Pythias was the first fraternal organization to be chartered by an act of Congress, in 1864. This is likely where Jack connected to, and maintained, his political affiliations.

Another similarity would be the manner in which adolescents demand things from their parents. One of the few letters I found between the Jack parents and their children reads, almost exactly, like a telephone conversation I overheard the other week between a Cal Poly student and his mother: “Going to Sonoma Sunday, send twenty five dollars. Have written.” This just goes to show that throughout history some things change, and some things remain the same.

4 comments on “Discoveries in the Jack Family Papers: Some things change and some things don’t”