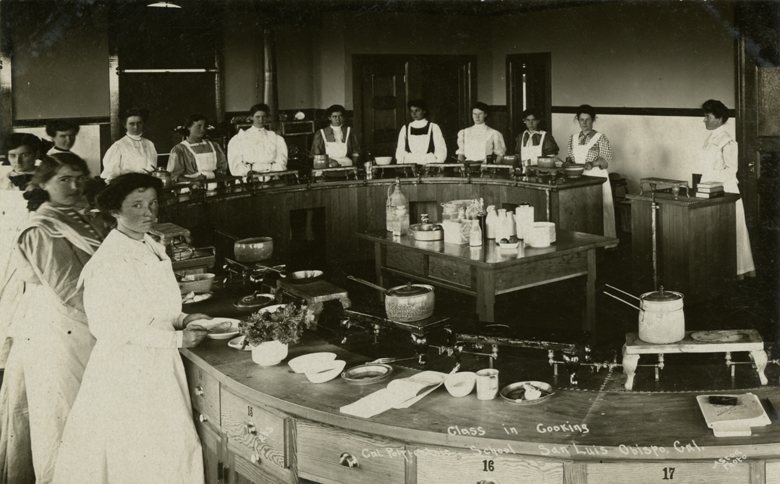 — 3 Comments ↓
Back to News and Stories

Soquel Filice (HIST ’15) is a Student Assistant in Special Collections and Archives. This is the first in a series of stories she is writing about the history of women at Cal Poly for Women’s History Month. Read her second and third blog posts in the series here and here.

Since 1995, March has been designated by the American government as Women’s History Month, established and celebrated to”pay tribute to the generations of women whose commitment to nature and the planet have proved invaluable to society.” In honor of this month, I wanted to explore what it has been like for female students at Cal Poly. This post and others throughout the month are a compilation of statistics, photos, primary sources, and readings that I have found about what it was like to be a woman at a polytechnic school.

Many students are not aware of the presence that women had at Cal Poly in these early years and the impact that they still have today. What was it like to be at a school dominated by a large male population?

Student enrollment, now and then

As of Fall 2011, women make up 46% of Cal Poly’s student, but this was not always the case. When California Polytechnic School opened as a post-high school vocational program in 1903, there were 11 young men and 4 young women enrolled as full time students.  By 1925, the student body was 17% women and 83% men. These numbers dropped to 6% women and 94% men in 1929, the last year women were allowed on campus at Cal Poly until 1956.

Some of the biggest female influences on campus from 1903-1930 were through faculty support and on-campus clubs. Margaret Chase, the only women to head California Polytechnic School, was vice president from 1910 until she took over as interim president in 1924. She established a club in 1910 called the Amapola Club (named for the Spanish word for “poppy”). This club allowed women students on campus to feel closer to each other and almost like a family. As the club grew, the description of its purpose started to change. In 1929, the last year of the Amapola Club, the purpose of the club was to “promote good fellowship and cooperation” instead of familial ties. The Amapola club planned various events for Cal Poly students to enjoy including picnics, parties, and afternoon teas.

What is interesting about these early women at Cal Poly is how well they seemed to fit in with the male students. In some of the early class photos, Cal Poly women dress very masculine in their required uniforms. What is fascinating to me is the description of graduating seniors in the early yearbooks and how both male and female students are equally compared for both their outward appearances and natural skill. A comparison of the description of two graduating seniors in the 1929 El Rodeo yearbook reveals this trend:

Harriet Wright: “Blonde with popularity plus. She’s the only girl in General Science Class, and gets away with it. Harriet has that natural ability that makes her a good cook, and she’s not bad at the tennis racket.”

Armond Barton: “He is an auto student and ought to do something to prevent his good looks. We’re sure he would make a good cook for he has been batching the past year.”

Another way that early Cal Poly women were able to enjoy the same activities as men was in sporting events. The Women’s Basketball team started as early as 1908 and played games all over SLO County until 1911. They were established even before the men’s basketball team, which is quite an accomplishment. Basketball games and other activities such as athletic carnivals fostered a sense of school pride and camaraderie between men and women at Cal Poly.

In 1929, at the start of the Great Depression, California Governor C. C. Young banned women from enrolling or studying at the California Polytechnic School after 1930. The household arts curriculum was removed and the women’s dormitory was filled with male students. Although the legislation was repealed in 1937, women students were not allowed to enroll again until 1956. Until then, they would continue to support the men in their lives and play a background role that was not challenged until the late 1950s.