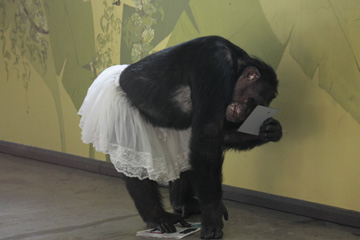 We need a new genre: Chimp Literary Fiction. (For a note on this photo, please see the link below from Chimpanzee Sanctuary Northwest.)

I can think of two haunting books I’ve read featuring chimps as characters (Me Cheeta by James Lever, and The Evolution of Bruno Littlemore by Benjamin Hale) without breaking a sweat.

A subject search in Polycat for “Chimpanzees — Fiction” shows others I haven’t read: The Darling by Russell Banks, and Great Apes by Will Self.

The latest entry is Karen Joy Fowler’s We are all completely beside ourselves, and this time the chimp character is a member of the family: the father is a psychologist who introduces a chimp to be raised, as much as possible, as one of the family’s children, so that he can compare their language acquisition and communication skills. The story is narrated by Rosemary, the family’s daughter, who feels experimented on every bit as much as her chimp sibling. Rosemary’s narration of the story begins obliquely; she omits important, basic information, and, taking the advice her parents wearily gave her when she was an overly chatty little girl, she starts her story in the middle.

I’m not sure this qualifies her as an unreliable narrator, at least not unintentionally unreliable. She’s more like a confused party who’s still trying to make sense of what’s happened to her family, and her possible guilt in causing it. Her mother is a sickly recluse for the first part of the book; her father, who perpetrated the experiment on the family, is a closet drinker and cut off emotionally from the others; Rosemary, we’re told indirectly, has fled the family and barely talks; and her older brother Lowell winds up as a fugitive from the FBI, as a result of his actions against animal experimentation.

This makes the book sound grim, and I won’t deny that there are some very dark moments in it. But Fowler is often hilarious, so the bleakness isn’t relentless. By about the middle of the book, the plot really takes off.

The book has memorable characters, originality, and asks a number of serious ethical questions without being preachy — do we have the right to interfere with an animal’s development? What do we owe our children? Is the advancement of science more important than how we treat each other? One final note: if you’re planning to read this book, I’d avoid looking at too many blurbs, reviews, and synopses. I’ve been careful not to reveal a major plot point that, in my opinion, is better discovered while reading the book; other reviews I’ve read do reveal it.

himp photo: Chimpanzee Sanctuary Northwest [for a note about the ethics of chimps in clothes, follow this link.]