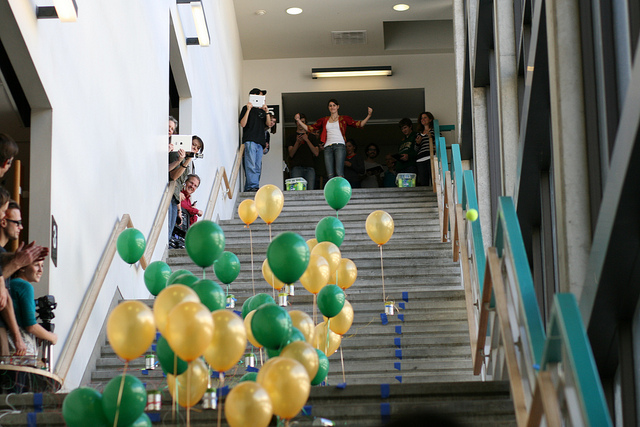 Recap — green won with 19 and gold came in at 17! Then it was a free-for-all as we threw dozens of remaining tennis balls down the grand staircase for fun. Good times, good, good times. You can read all about it here or on Boing Boing.

Cal Poly Science Cafe welcomed Michael J. Newman and Scott Hutchinson in February, and together we totally transformed our seventy-two concrete steps into a giant live game board.  We used 1,200 feet of wire, 48 Internet-connected tin cans decorated with green and gold balloons and, of course, tennis balls. The really awesome thing — beyond throwing balls down a staircase, in a library — was that the cans were connected to a live scoring site which players could view on their mobile devices or on displays throughout the library.

Here’s an interview with Scott and Michael about their inspiration and philosophy in making things for fun, along with some tech details:

We also have an awesome montage of the event.

To see the photo album of our fun go to Kennedy Library Flickr, where this photo is from.

You can read more about it and get source files on Michael’s site, Pomp.